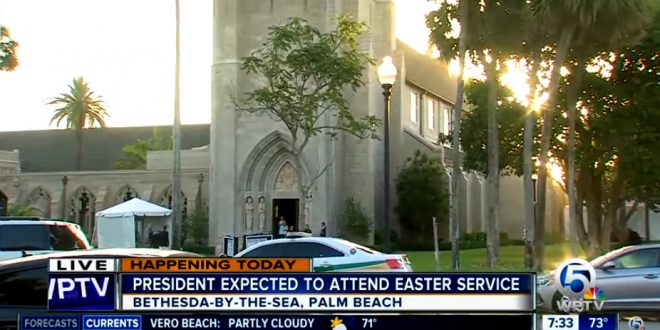 President Donald Trump arrived with First Lady Melania Trump and other family members for the 11 a.m. Sunday morning Easter services at The Episcopal Church of Bethesda-by-the-Sea in Palm Beach. Trump, in a dark suit and red tie, waved to photographers across the street from the church. He was accompanied by his wife, daughter Tiffany, and son Barron.

Melania Trump’s parents were also there, according to a White House pool reporter traveling with the president. It’s the same church that the future President and First Lady were married at in 2005. The Trumps were expected to head back to Mar-a-Lago after the church service to have their annual brunch and Easter egg hunt with Trump’s older sons Eric and Don, Jr., and their families, according to a White House pool reporter.