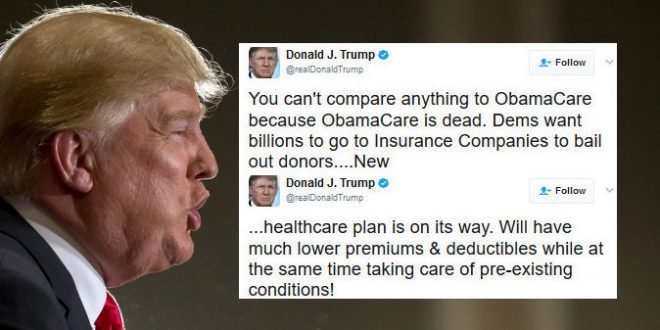 Trump: You Can’t Compare Any GOP Health Plan To Obamacare Because Obamacare Is Totally Dead

President Donald Trump isn’t giving up on a new plan to repeal and replace the Affordable Care Act. In Sunday morning tweets, Trump said a new health care plan is on its way, adding: “Obamacare is dead.”

Congress has yet to pass legislation to repeal and replace Obamacare, something Trump promised during the campaign that he would do on day one. Saturday marked his 100th day in office.

The Democrats, without a leader, have become the party of obstruction.They are only interested in themselves and not in what’s best for U.S.

You can’t compare anything to ObamaCare because ObamaCare is dead. Dems want billions to go to Insurance Companies to bail out donors….New

…healthcare plan is on its way. Will have much lower premiums & deductibles while at the same time taking care of pre-existing conditions!