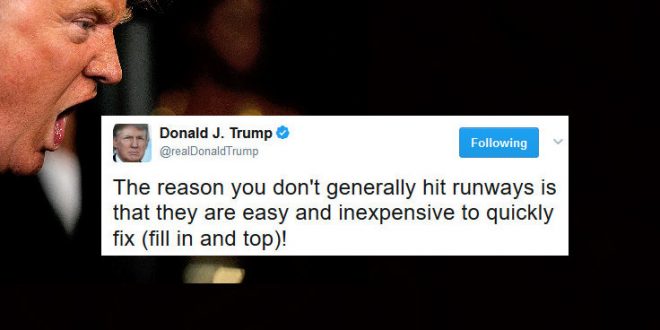 President Trump took to Twitter on Saturday to defend a U.S. missile strike on a Syrian military air base amid reports that the Syrian government was continuing to use the air base to launch attacks. “Initial indications are that this strike has severely damaged or destroyed Syrian aircraft and support infrastructure and equipment at Shayrat Airfield, reducing the Syrian Government’s ability to deliver chemical weapons,” the Pentagon said Thursday.

But reports surfaced on Friday that Syrian warplanes had carried out attacks from the installation, leading some to question the efficacy of the U.S. response. In a letter to Congress on Saturday, Trump explained his decision to carry out the strikes on Shayrat, saying it was in the country’s “vital national security and foreign policy interests.” He also warned that the U.S. was prepared to take further military action, if necessary.

The reason you don’t generally hit runways is that they are easy and inexpensive to quickly fix (fill in and top)!

So you bombed an enemy country's air base and warned their closest ally first and you didn't EVEN DAMAGE THE RUNWAY #Idiot https://t.co/iivvtGkWEa