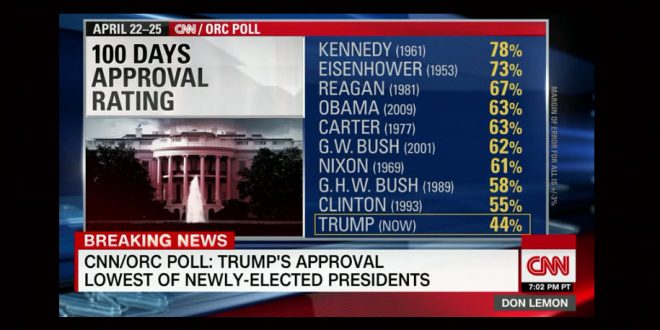 As the 100-day mark of Donald Trump’s presidency approaches, a new CNN/ORC poll finds the President reaches this milestone holding on to the lowest approval rating of any newly-elected president at this stage, amid sharp partisan divides and a failure to capitalize on post-election strengths.

Overall, 44% say they approve of Trump’s handling of the presidency, 54% disapprove. That’s about the same as in each of the two previous CNN/ORC polls taken after his inauguration. That 44% marker puts Trump last among approval ratings for newly-elected presidents at the 100-day point since modern polling began, a trendline that runs back to Dwight Eisenhower. Trump is last by a significant margin, trailing Bill Clinton’s previous low by 11 points.

The poll finds declining ratings for Trump’s handling of two issues that have been top priorities since he took office — health care and immigration. About 6 in 10 Americans disapprove of Trump’s handling of each of those issues, and both have tilted more negative since early March.

His numbers have held steady, however, on his handling of foreign affairs, national security and the role of commander-in-chief, after taking several high-profile actions on those fronts during the last month. Assessing his overall use of the military, most (52%) say he’s used it responsibly since taking office.