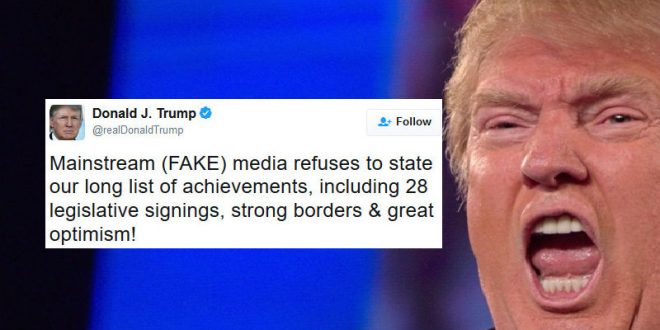 Trump Bitches About Mainstream Media For 1000th Time, Reminds Nation That May 1st Is Loyalty Day

On his 100th day in office, facing a historically low popularity rating, a succession of intractable foreign crises and multiple investigations of his links with Moscow, Donald Trump reminded the nation that 1 May was Loyalty Day.

The day is an American tradition dating back to the Cold War, when it was a bolster to stop May Day becoming a rallying point for socialists and unionised workers. But for an embattled president learning on the job, it has an added resonance.

Making his remarks in an interview with Fox News timing with the 100-day mark, Trump also declared himself “disappointed” with congressional Republicans – despite his many “great relationships” with them.

Regarding his lack of signature legislative achievement, he blamed the constitutional checks and balances built in to US governance. “It’s a very rough system,” he said. “It’s an archaic system … It’s really a bad thing for the country.”

Trump celebrating Russia’s most famous holiday as “Loyalty Day” may be revealing more than he intended.

#LoyaltyDay, which recognizes America's principles, has been around since President Eisenhower. https://t.co/hzbKU72ZKY