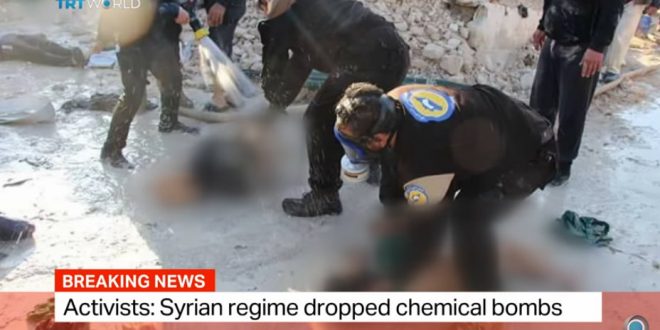 At least 58 people, including nine children, were killed in an air raid that released “toxic gas” on the rebel-held Syrian town of Khan Sheikhoun on Tuesday, a monitor said. The attack caused many people to choke or faint, and some had foam coming from their mouths, the Britain-based Syrian Observatory for Human Rights said, citing medical sources who described the symptoms as possible signs of a gas attack.

Locals said the attack began in the early morning, when they heard planes in the sky followed by a series of loud explosions after which people very quickly began to show symptoms. They said they could not identify the planes. Both Syrian and Russian jets have bombed the area before.

Russia’s defence ministry denied it carried out the raids, telling the State-run RIA news agency that it carried out no bombing runs in the area on Tuesday. The Syrian government has repeatedly denied using such weapons and the Syrian army could not immediately be reached for comment.