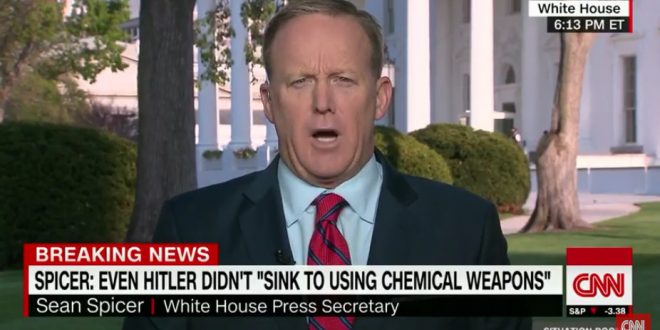 White House press secretary Sean Spicer apologized Tuesday after saying Adolf Hitler “didn’t even sink to using chemical weapons” during World War II in an effort to shame Russia’s alliance with Syrian President Bashar al-Assad and his use of chemical weapons. The comment was immediately decried and after a series of attempts to clear up his words, Spicer apologized in an exclusive interview with CNN’s Wolf Blitzer.

“I was obviously trying to make a point about the heinous acts that Assad had made against his own people last week, using chemical weapons and gas. Frankly, I mistakenly made an inappropriate and insensitive reference to the Holocaust, for which there is no comparison,” Spicer said. “And for that I apologize. It was a mistake to do that.” Spicer, who said he was “aware” that gas chambers were used during the Holocaust, later said he should have “stayed focused” on Assad and asked people to forgive him for his “mistake.”