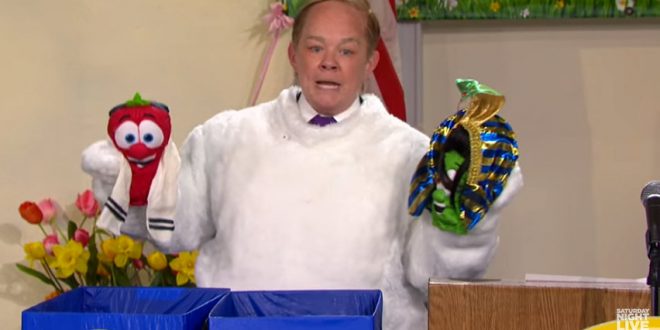 Melissa McCarthy returned to “Saturday Night Live” to reprise her impression of White House press secretary Sean Spicer, skewering his gaffe earlier this week involving Hitler and the Holocaust. McCarthy came out in a bunny suit, a reference to Spicer having played the Easter Bunny at one of the White House’s Easter Egg Roll events during the George W. Bush administration.

Spicer stated that even Hitler didn’t resort to using chemical weapons on his own people — a comment that drew immediate corrections and a storm of criticism for insensitivity and lack of knowledge of the Holocaust. To make matters worse, Spicer’s comment came on Passover. He later apologized for the verbal debacle in an interview with CNN.

But there was also a new character: guest host Jimmy Fallon, as the dialogue-free, bulletproof vest-wearing Jared Kushner. The show’s cold open began with Baldwin’s Trump sitting in the Oval Office, reflecting on his first 100 days as president. Bennett’s Pence, a folder in hand, stands next to Trump.