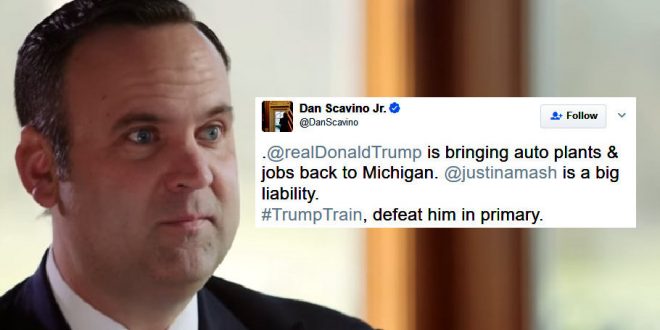 A senior adviser to President Donald Trump on Saturday urged a primary challenge against a House Freedom Caucus member, prompting charges that he may have violated federal law against using his official position to sway an election campaign.

Dan Scavino Jr., director of social media and senior White House adviser, tweeted that Michigan Rep. Justin Amash is a “big liability” for the state and encouraged a GOP primary opponent to oust him in 2018.

But that tweet, sent from Scavino’s personal Twitter account, immediately landed him in controversy as ethics lawyers called out Scavino for possibly violating the Hatch Act, a Depression-era law that regulates campaigning by government officials.

Scavino got his start as Trump’s golf caddy. Back in December former Fox News host Megyn Kelly revealed that she’s hired bodyguards after getting death threats due to Scavino’s tweeted attacks on her.

.@realDonaldTrump is bringing auto plants & jobs back to Michigan. @justinamash is a big liability.#TrumpTrain, defeat him in primary.

Look at the official photo on this page. Read the Hatch Act and fire this man NOW. Someone call OSC https://t.co/xTAcfIv3K3