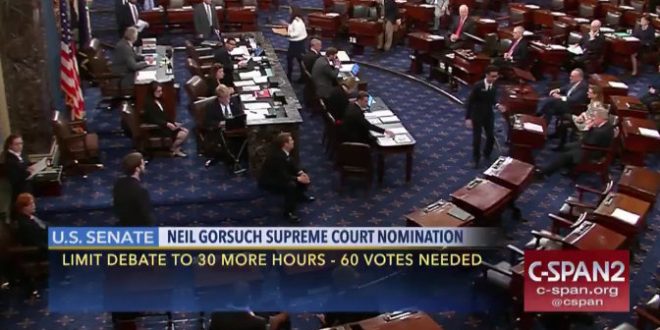 Democrats successfully blocked Judge Neil Gorsuch’s confirmation to the U.S. Supreme Court from advancing in the U.S. Senate on Thursday, sparking what is expected to be a bitter clash with Republicans over how the chamber confirms high court nominees.

Gorsuch failed to earn the 60 votes needed to end debate on his nomination. In response, Majority Leader Mitch McConnell (R-Ky.) has vowed he will change Senate rules in order to confirm Gorsuch and all future Supreme Court nominees with a simple majority vote.

A final confirmation vote on Gorsuch is not scheduled until Friday, when 52 Republicans and at least three Democrats — from states won by Trump in last year’s election — are expected to vote to have him replace the late Antonin Scalia on the high court.

Previous TENNESSEE: GOP Bill Would Amend State Constitution To Declare That God Is The Source Of All Liberty
Next Kremlin: Our Support For Assad Isn’t Unconditional