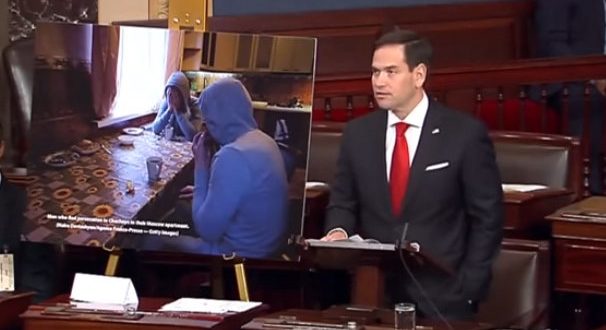 Sen. Marco Rubio (R-Fla.) denounced on the Senate floor Monday the ongoing reports of anti-gay arrests and detention in Chechnya, blaming Russian President Vladimir Putin for allowing them to happen.

Rubio, who previously denounced the alleged atrocities on Twitter, called on the U.S. government to “do more to ensure that all people are protected and those who harm them are held responsible.”

“We should use our voice on the global stage to call attention to these horrifying acts and to ensure that they are condemned in an appropriate way, ultimately in the hopes that they will be stopped,” Rubio said.

“There have been reports in the past of similar abuses, although these reports seem to be the most brutal and should provoke anger in all of us,” Rubio said. “We should never, ever tolerate human rights violations against any person for their political views, their religious beliefs, or their sexual orientation.”

Last week UN Ambassador Nikki Haley called for a United Nations investigation. The US State Department has twice called on the Putin regime to act, but the Kremlin has so far dismissed multiple reports of the atrocities. Meanwhile the number of “concentration camps” where gay men are reportedly being detained has climbed from two to six.
RELATED: While we applaud Rubio’s speech, it must also be pointed out that his Senate voting record on LGBT issues has earned him a 0% rating from the Human Rights Campaign.