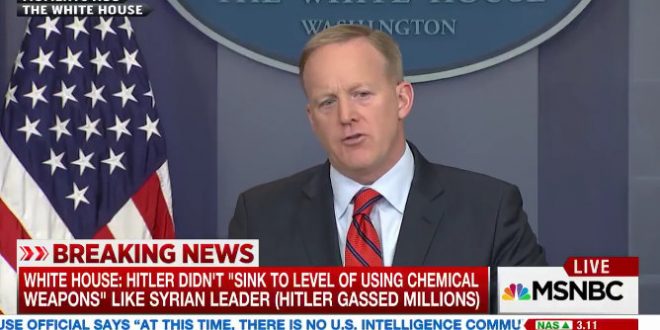 White House Press Secretary Sean Spicer declared unequivocally that Adolf Hitler didn’t use chemical weapons during World War II on Tuesday, triggering a firestorm as people pointed out Nazis’ use of gas to kill Jews and others during the Holocaust.

“We didn’t use chemical weapons in WWII. We had someone as despicable as Hitler who didn’t even sink to using chemical weapons,” Spicer declared as he attacked Russia for backing Bashar Assad’s brutal regime in Syria.

He dug himself deeper when offered a chance to clarify a few minutes later. “When you come to sarin gas, he was not using the gas on his own people the same way that Assad is doing,” he said to shock in the White House briefing room. Hitler infamously used hydrogen cyanide known as Zyklon B at Nazi death camps targeting Jewish and other people.

I hope @PressSec takes time to visit @HolocaustMuseum. It's a few blocks away. https://t.co/24fNoMUyS8

Spicer says that "even Hitler" did not use chemical weapons, apparently forgetting gas chambers.

"Sean Spicer tries to clarify Hitler remark." If your remark about Hitler needs clarifying, you, uh, probably shouldn't have said it.

UNITED: We are the worst people in the world at PR.

"Adolf Hitler is an example of somebody who's done an amazing job and is being recognized more and more."