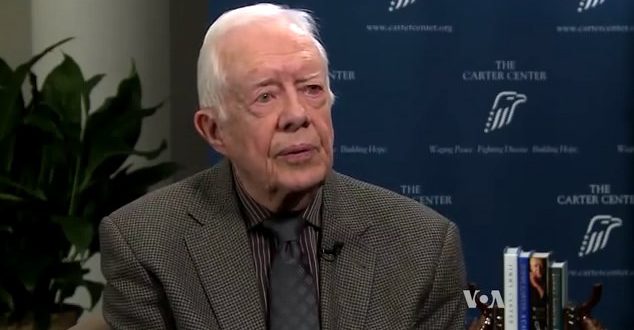 The Mauricio Macri administration reverted a decision to award former US president Jimmy Carter the Order of the Liberator General San Martín — the maximum distinction that the country can give to a foreign personality — under the pressure from US President Donald Trump’s administration, CNN Español reported this week.

The official tribute, which had already been approved by the foreign ministry and was published in the Official Gazette, was cancelled after receiving a specific request by the US government, which suggested it would be better to delay it. Carter was to be given the award for his work in promoting human rights during Argentina’s last military dictatorship.

After being informed about the decision, the foreign ministry had again requested that President Macri give the award in spite of the rejection by Trump’s government since it had been made official, according to an anonymous foreign ministry official consulted by CNN’s David Cox.

Like Trump, the Argentine president was born into wealth and the New York Times reports that they’ve long had a “personal relationship” via business dealings.

Macri met with Trump in the White House on Thursday and it seems likely that Carter’s award was spiked so that the spotlight remained on Trump during his visit.

And you know that the relentlessly petty Trump would want to take revenge on Carter, who last year denounced Trump’s “lack of moral and ethical principles.”

NOTE: The Buenos Aires Herald article largely appears to be an at-times clumsy translation from the original report by CNN Español. Perhaps a Spanish-speaking JMG reader can provide any missing nuance.

Previous Franklin Graham Attacks Democrats For Proposed Ex-Gay Torture Ban: Homosexuality Is An Abomination
Next Reince Priebus: We’ve Looked At Changing Libel Laws So Trump Can Sue Over News Items He Doesn’t Like