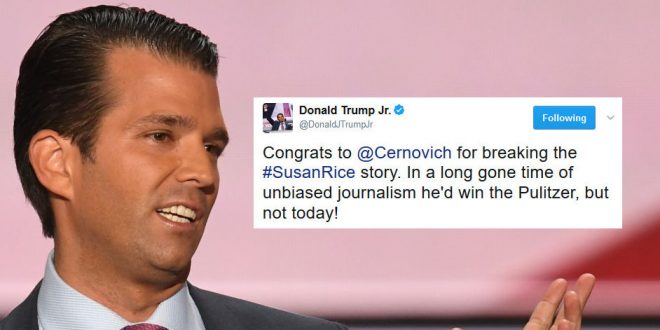 This morning Donald Trump Jr. posted the above tweet in praise of infamous “Pizzagate” promulgator Mike Cernovich for naming former Obama advisor Susan Rice as the person who ordered the unmasking of Trump officials overheard during surveillance of foreign operatives. Junior’s tweet came minutes after his father retweeted a Drudge link to a story about Rice on the right wing site Daily Caller. Last week Cernovich was the subject of a 60 Minutes fake news exposé.

Congrats to @Cernovich for breaking the #SusanRice story. In a long gone time of unbiased journalism he’d win the Pulitzer, but not today!

Yes @DonaldJTrumpJr is promoting a misogynist, racist, conspiracy theorist, but hey have you met his father?

You know, @DonaldJTrumpJr promotes so many racists that it really makes you wonder… pic.twitter.com/q067PIjrVK