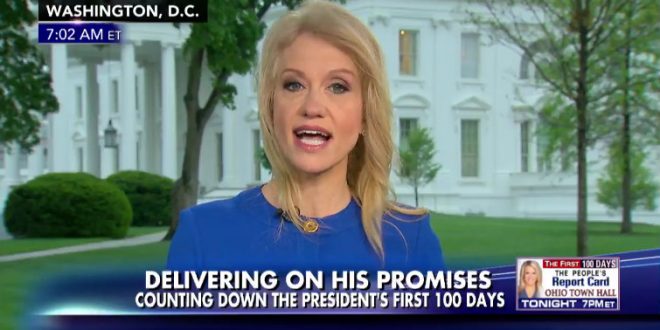 Propaganda Minister Kellyanne Conway Slams Obama’s Speech: Is He The Leader Of The Democrats? [VIDEO]

Top White House advisor Kellyanne Conway on Tuesday criticized the Democratic Party, saying former President Obama’s public appearance a day earlier made her feel like she has “no idea” who is leading the party. “President Obama reminded me yesterday, I have no idea who the leader of the Democratic Party is. Is it him? On whose watch?” Conway asked on “Fox & Friends.”

“I think the Democratic Party is having a real identity crisis,” she added. Conway questioned how Obama could be the party’s leader after the Democrats lost so many Senate, House and gubernatorial seats during his tenure as well as losing the White House. “They lost the White House, the House, the Senate, nearly 1,000 state legislative seats, lots of chambers and governorships,” she said.

.@KellyannePolls: Seeing Obama yesterday reminded me I don't know who the leader of the Dem Party is. They're having a real identity crisis. pic.twitter.com/OcVfKjt3e9