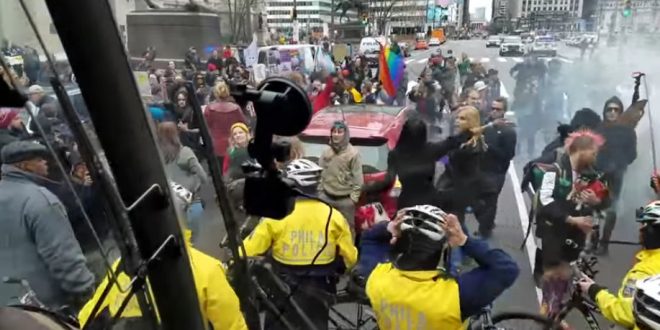 The transgender-rights supporters expected the bus to arrive sometime Saturday but didn’t know what time it was going to show up. Backed by conservative groups, the bus had been touring East Coast cities for the past couple of weeks.

In anticipation of the bus, the city’s Office of LGBT Affairs and other groups organized a “Pop-Up Love Party” on the north apron of City Hall from 11 a.m. to noon, during which supporters of the transgender community spoke, around 100 people gathered in support, and a light-blue-pink-and-white-striped transgender-pride flag was hoisted up on a flagpole at the end of the event. The flag will remain there for the weekend.

Moments after the speakers finished, the bus turned the corner and appeared. “There it is!” one person shouted. Swarms of people then ran toward the bus. A person banged on a drum. Eggs were thrown, hitting the bus. At least two smoke bombs were set off.

Local activists blame anarchists for crashing the protest and causing the police to intervene. As the melee heightened, Philly cops boarded the bus to give the driver directions to the closest freeway out of town. The driver complied. The video below was posted to NOM’s YouTube channel.

Previous Nixon’s Watergate Lawyer John Dean: Every Morning I’m Just Happy That Trump Hasn’t Blown Up The World
Next Trump Warns China On North Korea: Do Something About Their Nuclear Weapons Or US Will Act Alone