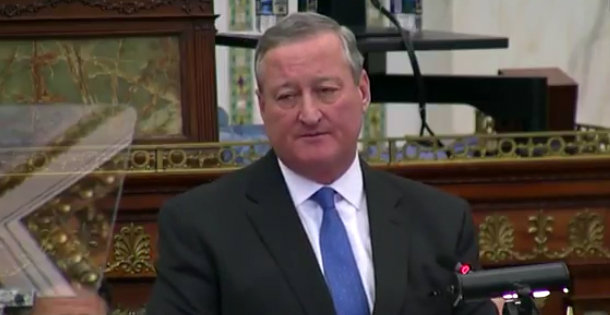 In Philadelphia, Mayor Jim Kenney’s office [PHOTO: Kinney] was deeply involved in organizing the violent demonstrations against us, which were attended by anarchist groups that are closely watched by the FBI. The mayor’s Office of LGBT Affairs proudly referred to themselves as ‘an accomplice’ in organizing protests which turned violent, with attacks on the bus and on police officers by gay activists and anarchists.

At least one of them was arrested and we were prevented from speaking, an act of intolerant bullying the Mayor’s office takes pride in. Meanwhile, while we were being prevented from engaging in a discussion with these protestors, the mayors of both Philadelphia and Boston ordered LGBT/transgendered flags to be flown at City Hall.

What we encountered throughout the bus tour was a sustained, violent, coordinated attack designed to shut us down and force us to just go away. They failed to stop the tour or silence us, and, ironically, in the process made our very point that they don’t want to debate the issues and instead will use force and political power to silence Christians and all Americans who understand that biology determines gender.

Sadly, this kind of behavior is not limited to public demonstrations such as promoting our bus tour. Average Americans are routinely subjected to acts of intolerance whenever they speak up in defense of the obvious truth that gender is determined by biology and that nobody can change their gender.

The #FreeSpeechBus tour demonstrated in clear and stark terms why it is essential for Congress to move forward immediately to pass the First Amendment Defense Act, legislation which would prevent the federal government from discriminating against people of faith based on their views of gender, marriage and similar matters. No American should be subjected to discrimination or harassment by the government simply for standing by their deeply held beliefs about marriage, gender and human sexuality.

NOM will continue to work to counter the dangerous gender ideology of the left, and stand for the truth that we were all created male or female, and that gender is based on biology, not “identity” or emotions.

At this writing I can find no news accounts about Brown’s “accomplice” claim. But longtime readers know that Brown is infamous for lies and wild exaggerations. After all, didn’t eleventy billion attend his last hate march in Washington?