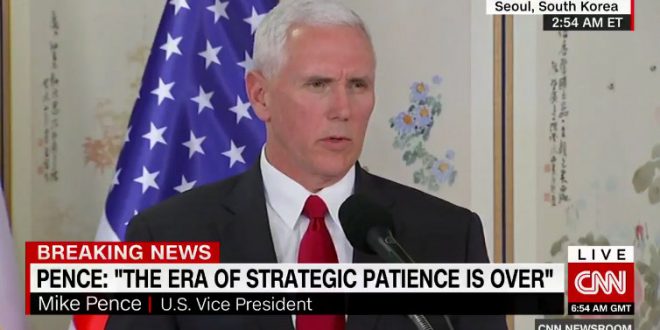 Pence Warns North Korea: Trump’s Strikes On Syria And Afghanistan Show He Won’t Back Down [VIDEO]

U.S. Vice President Mike Pence put North Korea on notice on Monday, warning that recent U.S. strikes in Syria and Afghanistan showed that the resolve of President Donald Trump should not be tested.

Pence and South Korean acting president Hwang Kyo-ahn, speaking a day after a failed missile test by the North and two days after a huge display of missiles in Pyongyang, also said they would strengthen anti-North Korea defences by moving ahead with the early deployment of the THAAD missile-defence system.

Pence is on the first stop of a four-nation Asia tour intended to show America’s allies, and remind its adversaries, that the Trump administration was not turning its back on the increasingly volatile region. “Just in the past two weeks, the world witnessed the strength and resolve of our new president in actions taken in Syria and Afghanistan,” Pence said in a joint appearance with Hwang.

US Vice President Mike Pence calls on the international community to join the US to confront North Korea https://t.co/i68PtQlnYQ pic.twitter.com/pLyLUNz2UN