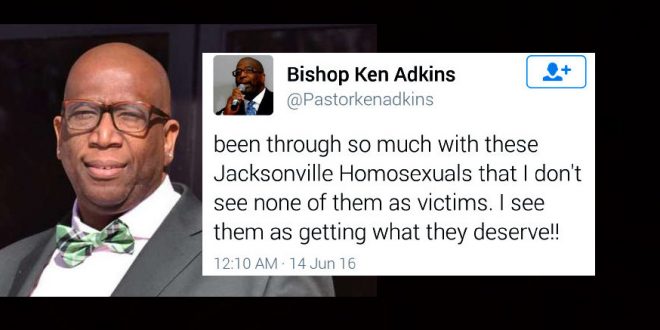 In a matter of an hour, a jury of three men and nine women found Kenneth Adkins guilty Monday of eight child molestation-related charges stemming from his sexual relationship with a teenage girl and boy at his church seven years ago. The controversial, anti-gay pastor showed no emotion as the verdict was read. He will be sentenced April 25. Georgia has strict mandatory minimum sentencing laws; and because Adkins, 57, has a prior record, there’s a possibility he will never again be a free man.

In multiple telephone interviews leading up to his trial, Adkins said he felt a calling to be a preacher and that’s when he landed in Southeast Georgia. It was here that he made enemies for failing to make good on financial promises; for his hard-line Republican stances that tended to put him out of step with other black people; and for seeming inflammatory no matter the subject.

Jacksonville Mayor Lenny Curry tapped Adkins for a panel discussion regarding the possibility of expanding the city’s human rights ordinance to include gays, lesbians and transgender people. Adkins told the Times-Union he was picked by multiple pastors to trumpet their anti-gay, anti-expansion stance. He said he was paid for efforts that included posting lewd and inflammatory caricatures of former mayor Tommy Hazouri in a restroom.

Previous OOPSIE: Ruth Bader Ginsburg Mistakenly Refers To Lindsey Graham As One Of “The Women Of The Senate”
Next Spicer: Bashar Assad Is Worse Than Hitler [VIDEO]