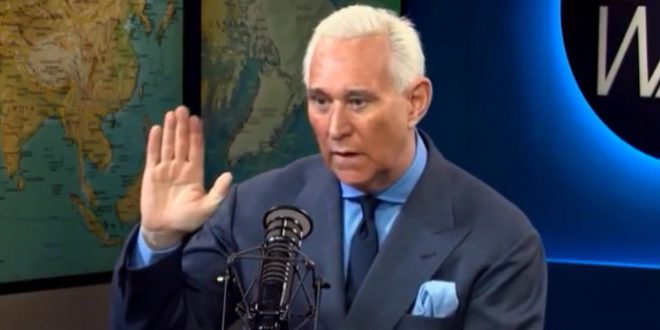 Ho hum, another insane teabagger who has no idea of how the First Amendment works. Brian Tashman reports at Right Wing Watch:

Stone, however, claimed that O’Reilly is the victim of an “orchestrated campaign of smear” by liberals and favorably compared him to Roger Ailes, the former Fox News head who also lost his job after several women alleged that he sexually harassed them.

“They can’t argue on the basis of ideas, they can’t argue on the basis of issues, so they have to silence us,” Stone said. “They’re trying to do so through Facebook, through Google, through these kinds of campaigns being run against O’Reilly. Censorship to me seems to be fundamentally un-American. We allow everybody a voice. This is a flagrant, egregious violation of the First Amendment.”

As you’ll see in the clip, Stone agrees with the nutjob host that the right never goes on “personal attacks” against people on the left. You may recall that just this month Stone sat next to Alex Jones as Jones went on a violent homophobic rant against Rep. Adam Schiff. And you’ll surely remember that Stone himself has been banned from MSNBC and CNN for his racist attacks on multiple media personalities.