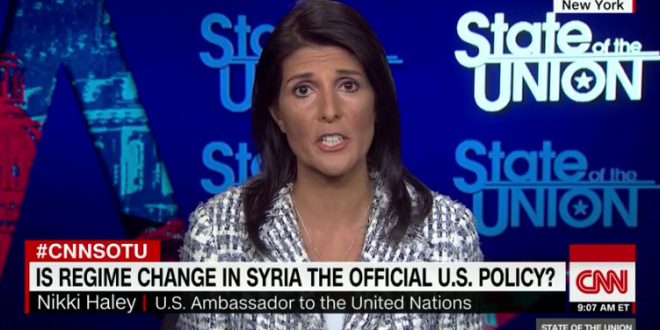 The US ambassador to the United Nations, Nikki Haley, has told CNN that removing Syrian President Bashar al-Assad from power is a priority, cementing an extraordinary U-turn in the Trump administration’s stance on the embattled leader. Two days after the US launched military strikes on a Syrian airbase in response to a chemical weapons attack widely blamed on the Assad regime, Haley said the departure of Assad was inevitable. In her interview with CNN’s “State of the Union,” Haley said removing Assad from power was one of a number of priorities for the US.

“Getting Assad out is not the only priority. So what we’re trying to do is obviously defeat ISIS. Secondly, we don’t see a peaceful Syria with Assad in there. Thirdly, get the Iranian influence out. And then finally move towards a political solution, because at the end of the day this is a complicated situation, there are no easy answers and a political solution is going to have to happen,” she said in the interview with anchor Jake Tapper, to air on Sunday.

Hayley’s statement is a “direct sabotage” of international efforts to achieve peace in Syria, the head of Russia’s Upper House Committee for International Relations, Konstantin Kosachev, wrote in a Facebook post. “Both moderate and armed opposition will read the US opinion. ‘And what’s the reason to go to Geneva or Astana after that?’ they’ll ask,” Kosachev wrote.

“And after reading that, they’ll take up arms again. Shoulder-to-shoulder with brave Americans, who by bombings of government airbases give an example of how one should really behave without any conventionalities. And we’re not talking about the terrorist groups, where not everyone can read, but all of them can fight,” Kosachev added.

UN Ambassador Nikki Haley: “We don’t see a peaceful Syria with Assad in there” #CNNSOTU https://t.co/fvTO645cK4