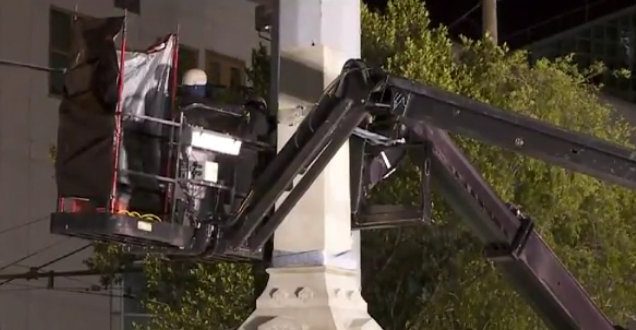 Efforts to remove four Confederate monuments commenced early Monday morning (April 24), as crews and police gathered around the Battle of Liberty Place monument downtown around 2 a.m. to begin dismantling the first of four statues eyed for removal by the city.

Just before 1:30 a.m., and after a small group of protesters had departed, a wave of officers with the New Orleans Police Department barricaded the entry points to the monument, which stands at the river end of Iberville Street outside the parking garage for Canal Place. Snipers were stationed on the parking deck looking down at the monument.

Then, just before 3 a.m., a couple of workers set inside a crane like a crow’s nest and shielded by a brown canvas began drilling into a section at the top of the Battle of Liberty Place obelisk. Minutes later, that section was pried loose and hauled onto one of the flatbeds, while the crew worked to dismantle the rest of the monument.

It scary that workers are wearing armor in fear of being shot by racists who want them up. pic.twitter.com/umPJUyr3bo