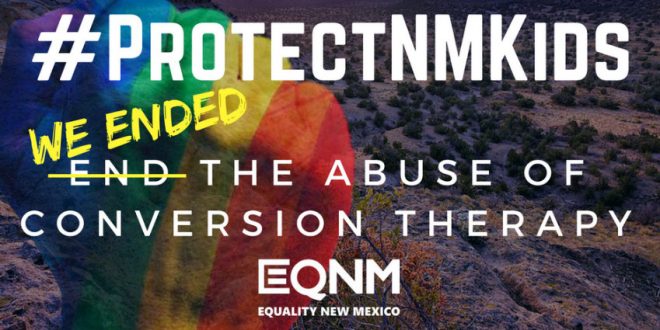 Gov. Susana Martinez has signed legislation that would ban the use on minors of conversion therapy that seeks to change a person’s sexual orientation or gender identity. The measure was among dozens signed by the Republican governor as the Friday deadline approached for her to act on legislation passed during the session that ended March 18.

Bill sponsor Democrat Sen. Jacob Candelaria of Albuquerque called the signing historic, saying New Mexico has a commitment to protect all children from abuse and that the issue transcends party labels and ideological differences.

The prohibition will apply to licensed physicians, nurses, psychologists and other health practitioners who apply conversion therapy to people under 18. It changes provisions of a consumer protection law and outlines disciplinary measures that can be taken by state licensing boards.

Six other states have banned ex-gay torture: California, Illinois, Oregon, New Jersey, New York, and Vermont. Bans have also been adopted in dozens of local municipalities across the country, including in Cincinnati, Seattle, Miami, Pittsburgh, and Washington DC.