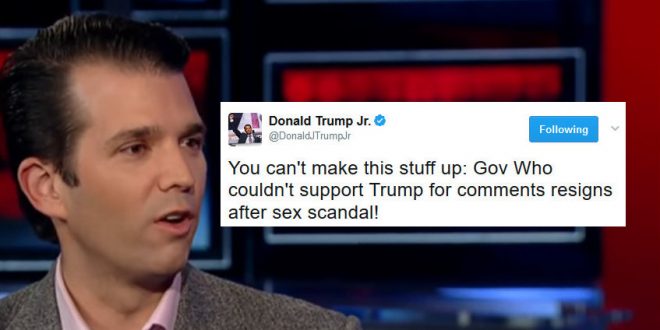 The son of President Donald Trump has weighed in on the resignation of Alabama Governor Robert Bentley. In a social media post sent out today, Donald Trump Jr. tweeted a link from a Gateway Pundit story titled “Jacka$$ Governor Who ‘Could Not’ Vote Trump over Sexual Comments Resigns over Sex Scandal with Former Aide.” Trump Jr. added “You can’t make this stuff up: Gov Who couldn’t support Trump for comments resigns after sex scandal!”

Bentley endorsed John Kasich in the 2016 Republican Primary, calling the Ohio Governor the “most qualified candidate.” Shortly after the release of a video revealed Trump making crude statement about women, Bentley released a statement saying he “cannot and will not vote for Donald Trump.”

Bentley seemed to change his tune after Trump was elected, however. Bentley – accompanied by [mistress] Rebekah Mason and her husband, Jon Mason, then a state employee – attended Trump’s inauguration and a pre-inauguration rally in Mobile, where Bentley posed for photos with the then-President-elect.