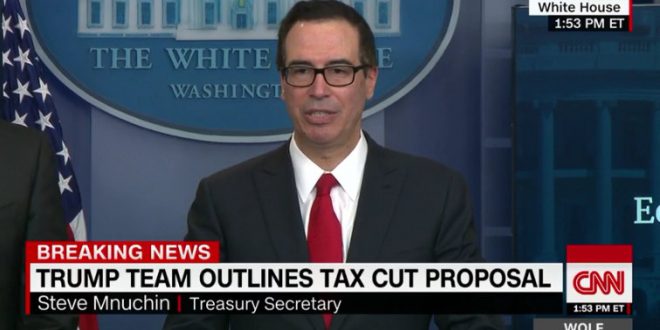 Treasury Secretary Steven Mnuchin confirmed the administration will propose a corporate tax rate reduction to 15 percent and said lawmakers broadly agree on the need for a tax overhaul, citing a “very successful meeting” on Tuesday evening in Washington.

The administration wants to implement the biggest tax cuts and reform in U.S. history as part of a drive to boost economic growth to 3 percent, Mnuchin said. Business tax relief is aimed at small firms and it’s not supposed to provide loopholes for the rich, he said.

“It’s clear that the House, the Senate, the administration are all on the same page: that tax reform is a major priority to boost the economy,” Mnuchin said. “We have a very uncompetitive system that’s hindering the economy and jobs.”

Trump’s plan will cut the number of income tax brackets from seven to three, with a top rate of 35 percent and lower rates of 25 percent and 10 percent. It is not clear what income ranges will fall under those brackets. The proposal will chop the corporate tax rate to 15 percent from 35 percent.

It would eliminate all tax deductions except for the mortgage and charitable contribution deductions. The White House said there will be a “one-time tax” on the trillions of dollars held by corporations overseas. However, Mnuchin said the rate for that tax has yet to be determined.

The plan would get rid of the estate tax, otherwise known as the “death tax.” Cohn said that the move will help privately-held businesses and American farmers. Analysis of the estate tax reveals that it affects only a very small portion of Americans.

Mnuchin also said the U.S. would go to a “territorial” tax system. Though further details were not forthcoming, such systems typically exclude most or all of the income that businesses earn overseas.

Mnuchin: Trump’s tax plan “will pay for itself” with growth, reduction of some deductions and closing loopholes https://t.co/jFjK2qUNDA

Previous CALIFORNIA: Ann Coulter Cancels Berkeley Speech After Sponsors Back Out Over Fears Of Violence
Next Tony Perkins: Send Me Money To Stop Millionaire Obama And His Army Of Fake News Propagators