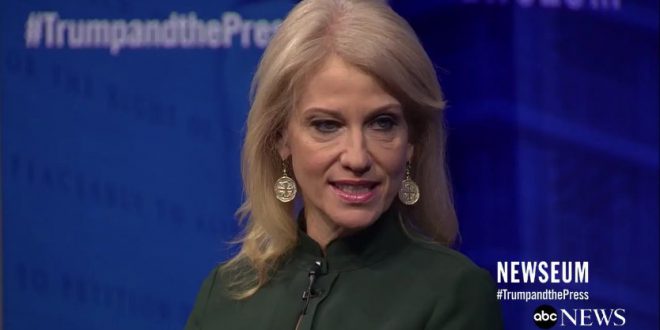 White House senior advisor Kellyanne Conway took part in a media forum on Wednesday morning, where she defended Donald Trump while shrugging off the notion that she contributed to the negative relationship between the president and the press.

Conway spoke with Michael Wolff at the Newseum’s ‘President and the Press’ event, where they brought up The Washington Post‘s tagline “Democracy Dies in Darkness.” The paper adopted the slogan approximately one month after Trump was sworn into office, and Wolff told Conway that “when they say ‘democracy dies in darkness,’ you’re the darkness.”

Ms. Conway did not appreciate that, as you’ll see.

Michael Wolff tells Kellyanne Conway: "When they say democracy dies in darkness, you're the darkness." https://t.co/lScxpthUZt

Previous MOSCOW: Tillerson Meets Putin At The Kremlin
Next ORLANDO: Wife Of Pulse Terrorist Pleads Not Guilty, Trial Date Set For One Week Before Attack Anniversary