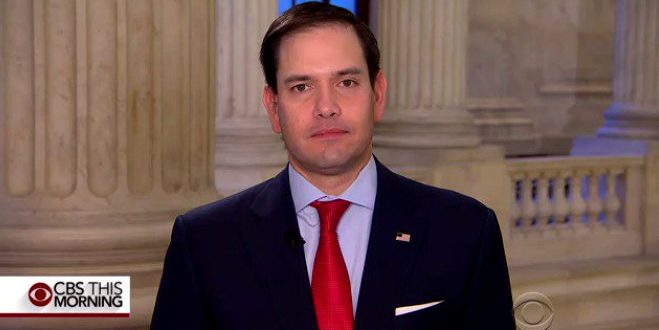 Marco Rubio has been on every network this morning to praise Trump’s strike on Syria. From the Washington Examiner:

Sen. Marco Rubio, R-Fla., said Friday that President Trump had the legal authority to launch a missile attack at a Syrian airfield Thursday night, because it was a limited attack that fell short of a full declaration of war. “The president was authorized to conduct this strike,” Rubio said on ABC News. “He not asking for a declaration of war, he’s not committing ground troops over an extended period of time.”

“He was dealing with exigent circumstances, and as the commander in chief, not only does he have the right, he has an obligation to act,” Rubio said. “Obviously, if this is going to be a broader, long-term conflict, it is important that he comes to Congress because we need to pay for it, it needs to be funded on top of everything else,” he added. “And I believe that’s exactly what they will do.”

.@marcorubio: #SyriaStrikes were the right thing to do. It was legal, Assad posed a threat to Americans, & it achieved a military objective. pic.twitter.com/PlsZ8TvgJR

.@marcorubio sounds off critics hitting President Trump for his tweets about Syria in 2013 pic.twitter.com/E0zz3ImfeU

Busy morning discussing military strikes in #Syria. The days of committing war crimes with impunity are over. #SyriaStrikes pic.twitter.com/NARxDQm02z

“Be sure of this: The wicked will not go unpunished” Proverbs 11:21 #SyriaChemicalAttack

In 2013, Rubio opposed Obama’s plan to attack Syria because it was a “pinprick”
Today, Trump basically pinpricks Syria & Rubio backs it 1/2

Maybe Rubio knows more about a longer-term plan, but right now he doesn’t appear consistent on military action in Syria 2/2