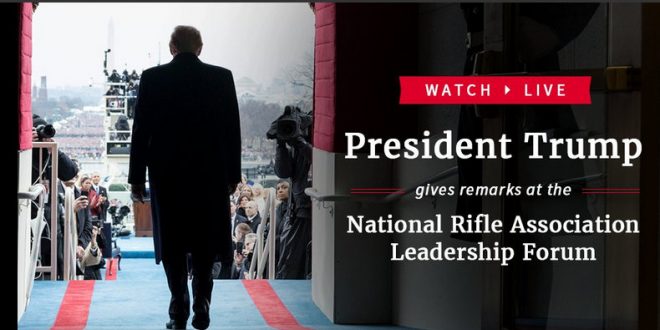 The NRA, a powerful political advocate for gun rights, has also been a formidable opponent of gun control laws.

Organizers of Friday’s protest, which was held in downtown’s Woodruff Park blocks away from the convention site, was meant to call attention to gun violence and lax controls on the purchase and use of firearms.

The protest, however, took on a decidedly politically tone. “We’re going to have to continue airing our grievances,” said Gerald Griggs with the Georgia Alliance for Social Justice, before leading the crowd in a chant of “Flip the 6th.”

Abt 200 ppl taking part in a "die-in" near #NRAshow2017 convention in Atlanta to protest @realDonaldTrump & #NRA. #FoxNews pic.twitter.com/lvPakQLNL1

The NRA is trying to stoke fear of the anti-Trump Resistance to sell more guns. #DisarmHate pic.twitter.com/BcNgLXj4Qx