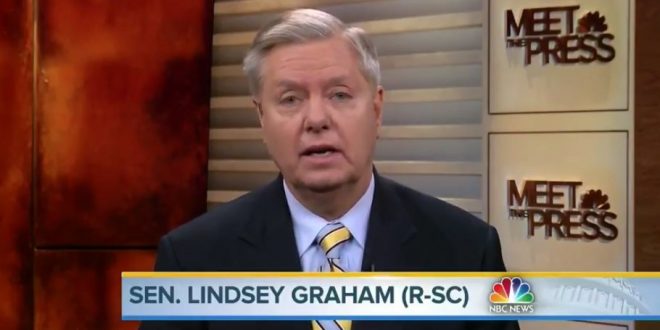 Lindsey Graham: Bashar Assad Is Telling Trump “F You” By Using The Airbase That Was Just Bombed [VIDEO]

Syrian President Bashar Assad is telling President Donald Trump “F you” by still flying military aircraft from the base the United States tomahawk missiles struck on Thursday, South Carolina Sen. Lindsey Graham said Sunday morning. Following reports of a chemical attack in Syria, the U.S. military bombed a regime airbase in Homs on Thursday. Since the bombing, Syrian warplanes have continued to take off from that air base.

“Here’s what I think Assad’s telling Trump by flying from this base: ‘F you.’ And I think he’s making a serious mistake,” Graham said on NBC’s “Meet the Press.” “Because if you’re an adversary of the United States and you don’t worry about what Trump may do on any given day, then you’re crazy.” Graham said the Islamic State is still top priority, adding that “ISIS should be Germany and Assad should be Japan,” relating it to World War II.