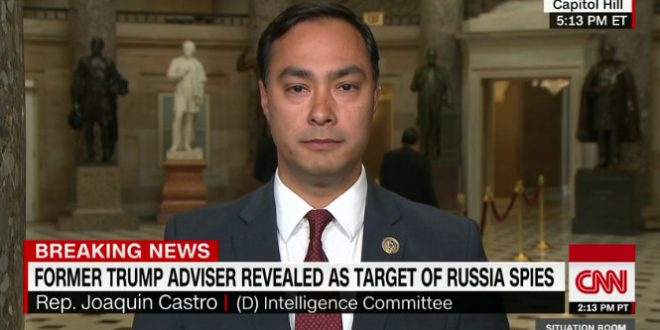 House Intel Committee Member Tells CNN: Some Trumpsters Will End Up In Prison Over Russia [VIDEO]

House Intelligence Committee member Rep. Joaquin Castro (D-TX) spun a lot of heads around on social media late this afternoon when he flatly told CNN’s Wolf Blitzer that he’s pretty sure some Trump associates will go to prison over their ties to Russia.

BLITZER: You want to elaborate on that give us more? Because that is obviously a very intriguing statement.

CASTRO: I wish I could, but I can’t at this time.

BLITZER: You’re confident that some Trump associates will end up in jail.

CASTRO: If I were betting, yes.

BLITZER: Including some working in the new administration or people who worked or advised the president during the campaign or maybe during the transition?

CASTRO: As you can imagine, Wolf, I will have to comment on that later. But my impression is that people will probably be charged and probably go to jail.

WOW. Rep. Joaquin Castro on Russia investigation: “I wouldn’t be surprised … that some people end up in jail” https://t.co/g6KvvWvuR8