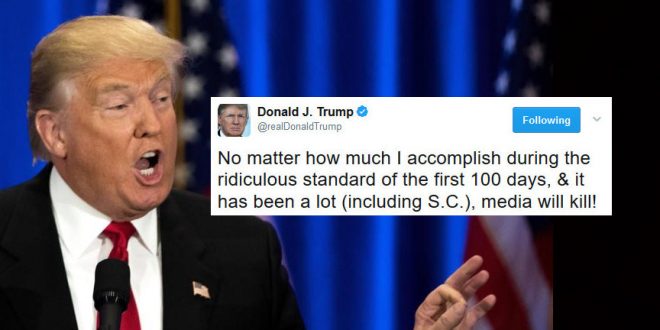 Hair Furor Whines Yet Again About The Media

President Trump took aim at the media early Friday morning, accusing journalists and news outlets of belittling and disparaging his early accomplishments in the White House.

Trump is set to hit the critical 100-day mark in his presidency on April 29, a week from Saturday. Those early days are typically considered the first standard checkpoint for a presidential administration and its ability to govern.

With little legislative achievement to speak of, Trump has focused on executive actions to roll back Obama-era regulations and climate policy.The biggest success of Trump’s young presidency, alluded to in his tweet, has been the nomination and confirmation of Supreme Court Justice Neil Gorsuch, whom Trump picked to replace the late Antonin Scalia.

No matter how much I accomplish during the ridiculous standard of the first 100 days, & it has been a lot (including S.C.), media will kill!

Previous REPORT: Feds Mull Charges Against Julian Assange
Next Chaffetz Denies Scandal Rumors: I’ve Been Given More Enemas By More People Than You Can Possibly Imagine