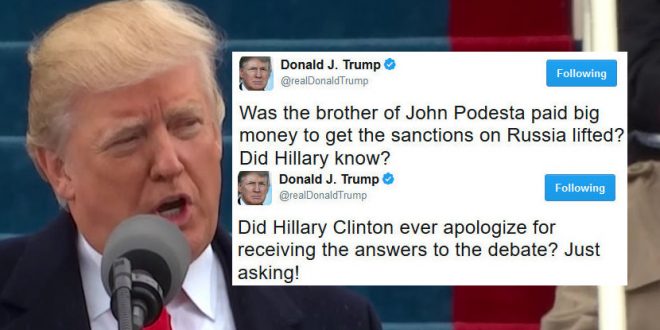 President Trump on Monday went after his former Democratic rival, Hillary Clinton, questioning whether she ever said she was sorry for getting “answers” ahead of a primary debate. Trump has attacked Clinton multiple times over her team receiving debate questions in advance of a televised town hall event from Democratic operative Donna Brazile. Brazile said last month passing along a list of topics to Clinton’s campaign was a “mistake I will never forget.” During a press conference earlier this year, Trump brought up the issue while pushing back against questions from reporters about possible ties between his campaign and Russia.

Such amazing reporting on unmasking and the crooked scheme against us by @foxandfriends. “Spied on before nomination.” The real story.

Was the brother of John Podesta paid big money to get the sanctions on Russia lifted? Did Hillary know?

Did Hillary Clinton ever apologize for receiving the answers to the debate? Just asking!