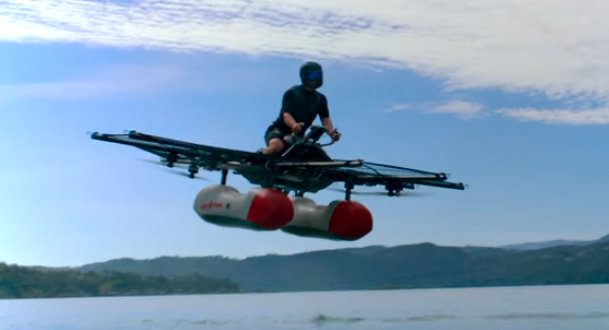 Feh. It only flies over water. The New York Times reports:

On a recent afternoon, an aerospace engineer working for a small Silicon Valley company called Kitty Hawk piloted a flying car above a scenic lake about 100 miles north of San Francisco. Kitty Hawk’s flying car, if you insisted on calling it a “car,” looked like something Luke Skywalker would have built out of spare parts. It was an open-seated, 220-pound contraption with room for one person, powered by eight battery-powered propellers that howled as loudly as a speedboat.

The tech industry, as we are often told, is fond of disrupting things, and lately the automakers have been a big target. Cars that use artificial intelligence to drive themselves, for example, have been in development for a few years and can be spotted on roads in a number of cities. And now, coming onto the radar screen, are flying machines that do not exactly look like your father’s Buick with wings.

More from The Verge:

Kitty Hawk hasn’t said exactly what the Flyer is for, nor has it set a price for the retail version. But the company is enticing eager pilots with a $100 three-year membership that offers priority placement on a waiting list, company-branded gear, and exclusive access to a flight simulator and company events. Members will also get a $2,000 discount off the eventual retail price.

The Flyer is considered to be an Ultralight aircraft per FAA regulations, which is why there’s no pilot’s license required. Kitty Hawk says that there are no plans to ship the vehicle outside the US.

Page is invested in another mysterious light aircraft company called Zee.Aero. But he’s hardly alone in his interest. Industry giants like Airbus have proposed multiple takes on a flying car, as have dozens of startups from around the world. And, coincidentally or not, Uber is holding a conference in Texas this week about its own flying car ambitions.