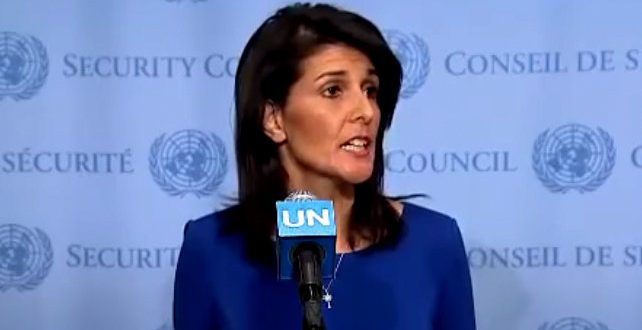 Today, GLAAD – the world’s LGBTQ media advocacy organization, called on Nikki Haley, United States Ambassador to the United Nations, to condemn the attacks on LGBTQ men by the Chechen government and investigate reports of possible imprisonment of LGBTQ people in concentration camps because of their perceived sexual orientation.

GLAAD’s call to action follows reports which surfaced last week that more than 100 LGBTQ men are being detained in Russian-controlled Chechnya because of their perceived sexual orientation, with three men allegedly being killed. Yesterday, international media outlets including the International Business Times released disturbing stories around two concentration camp-style prisons where the men are forced to endure many forms of physical and verbal abuse at the hands of government officials including electrocution and violent beatings. Some are reportedly being held from their families at ransom.

“It is beyond horrific for a country to proactively target, arrest, and abuse LGBTQ people,” said Sarah Kate Ellis, President and CEO of GLAAD. “U.S. Ambassador Nikki Haley must condemn this humanitarian crisis. As the leader of the free world, we can’t watch in silence as the world slips back to an era we should never go back to.”

When asked about the possible attacks on LGBTQ men, the Chechen government has publicly incorrectly declared that LGBTQ individuals simply do not exist in their country.

Over the last two weeks multiple witnesses and human rights groups have confirmed the existence of two Chechen prison sites where gay men are being detained and tortured. It was only yesterday, however, that some outlets began to characterize the prisons as “concentration camps.”

I'm calling on @nikkihaley to speak up against the reported #LGBTQ concentration camps in Chechnya. RT to join me. https://t.co/NM05ag67fA