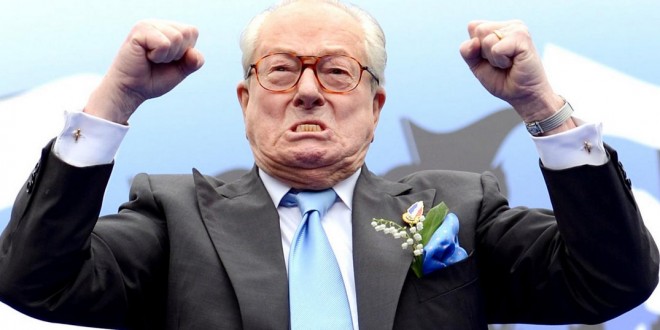 A remembrance ceremony for the policeman killed last week by an attacker in Paris “exalted” the concept of gay marriage, far-right presidential candidate Marine Le Pen’s father said on Friday, courting controversy for his daughter’s campaign.

Jean-Marie Le Pen, the National Front (FN) party founder from whom his daughter has sought to distance herself because of his controversial views, criticized a speech made at the ceremony by the dead policeman’s partner earlier this week.

“The long speech he made in some way institutionalized homosexual marriage, exalted it in a public way, and that shocked me,” Le Pen said in an interview on his web site.

The elder Le Pen has been convicted multiple times for inciting racial hatred and for denying the Holocaust. Earlier this month Marine Le Pen, who has vowed to repeal same-sex marriage if elected, sparked international outrage when she denied French collaboration with the Nazis. (Tipped by JMG reader Scott)