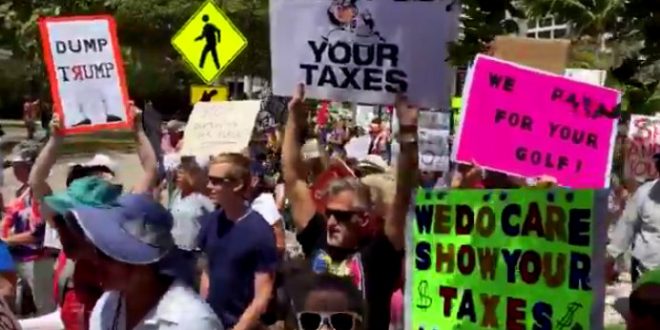 President Trump on Saturday reportedly took a longer route than usual on his way back to his Mar-a-Lago resort in what reporters said appeared to be an attempt to avoid large crowds of Tax March protesters.

According to pool reports, Trump’s motorcade made a long loop to get back to Mar-a-Lago after leaving Trump International Golf Club around 1:30 p.m.

Meanwhile, reporters traveling separately in press vans that continued on the shorter route back to the luxury resort immediately encountered “hundreds of protesters” demanding the president release his tax returns.

We were wondering why the president's motorcade took a longer than usual route home from golf: to avoid #TaxMarch protesters pic.twitter.com/Y00d6ynvlJ