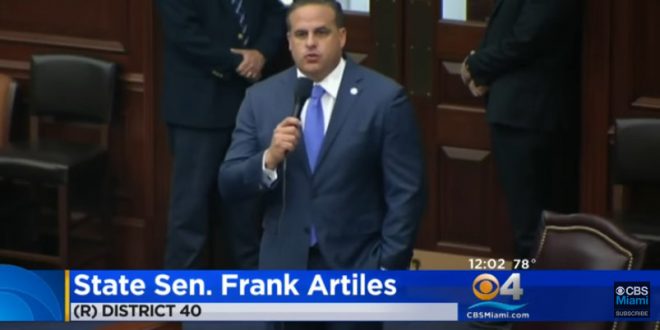 Hurling the N-word at black colleagues is where the Florida GOP draws the line, apparently. The Miami Herald reports:

Sen. Frank Artiles resigned from the Florida Legislature on Friday, consumed by a scandal that erupted three days earlier over a diatribe of insults the Miami Republican unleashed against two lawmakers at a Tallahassee bar.

In a letter to Senate President Joe Negron, Artiles said he was stepping down for the sake of his family and of the institution of the Senate, whose work ground to a near halt this week as Republican leaders grappled with Artiles’ political future.

“My actions and my presence in government is now a distraction to my colleagues, the legislative process, and the citizens of our great State,” Artiles wrote. “I am responsible and I am accountable and effective immediately, I am resigning from the Florida State Senate.

Negron, whom Artiles had derided in his rant as a “pussy,” ordered an investigation. Artiles, an ex-Marine known for his combative style, hired a sharp-elbowed Tallahassee lawyer and vowed to fight.

But by Thursday afternoon, even Artiles’ friends in the state Capitol, convinced he couldn’t possibly redeem himself, had begun to say privately that Artiles had to go. The most evident sign of his looming exit: Political hounds started chatting about his competitive southern Miami-Dade seat soon becoming open.

In 2015, Artiles filed a bill that would make it a crime for transgender citizens to use public restrooms that don’t correspond with their birth gender.

Previous Propaganda Minister Conway Gives Trump An “A” For First 100 Days, Say No Shutdown Is Coming [VIDEO]
Next Sessions: Arresting Julian Assange Is Now A “Priority”