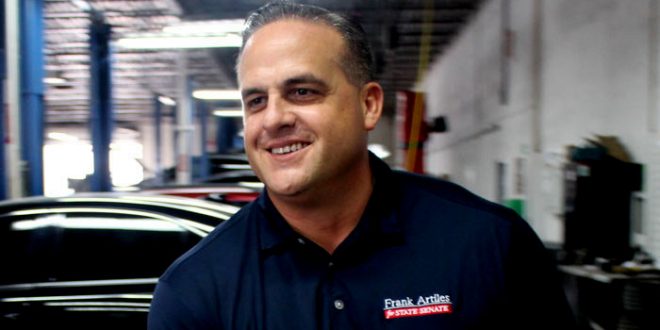 Miami Republican Sen. Frank Artiles dropped the n-word to a pair of African-American colleagues in private conversation Monday night — after calling one of them a “fucking asshole,” a “bitch” and a “girl,” the two senators said.

Over drinks after 10 p.m. at the members-only Governors Club just steps from the state Capitol, Artiles told Sens. Audrey Gibson of Jacksonville and Perry Thurston of Fort Lauderdale that Senate President Joe Negron of Stuart had risen to his powerful GOP leadership role because “six niggers” in the Republican caucus had elected him.

Artiles later told Gibson and Thurston that he’d used the word “niggas,” suggesting the slang term was not meant to be insulting, Gibson and Thurston said. It’s unclear whom Artiles was referring to, since the only black senators in the state Senate are all Democrats — and none of them backed Negron’s bid to lead the chamber.

By Tuesday night, the Florida Democratic Party had called on Artiles to resign. Negron, after initially saying little on the incident, said in a statement late Tuesday he was “appalled” by Artiles’ comments — and that Artiles will publicly apologize to Gibson on the Senate floor Wednesday. “Racial slurs and profane, sexist insults have no place in conversation between Senators and will not be tolerated while I am serving as Senate President,” Negron said.

In 2015, Artiles filed a bill that would make it a crime for transgender citizens to use public restrooms that don’t correspond with their birth gender.