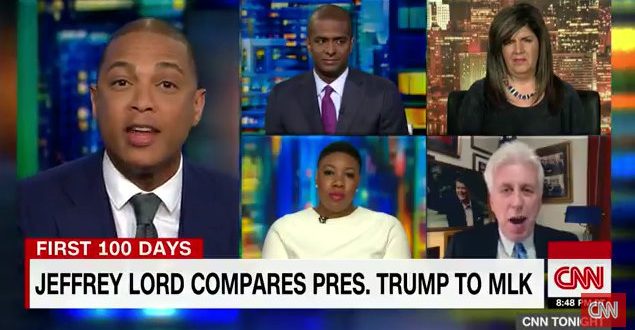 Raving Trump surrogate Jeffrey Lord has long been the craziest person on CNN and yesterday he really stepped up his game by repeatedly comparing Trump to Martin Luther King. The Washington Post reports:

In appearances on three shows and in an column for CNN’s website, Lord dug in his heels to defend the Trump-King comparison, twisting himself into a rhetorical pretzel as hosts, guests and a chorus of social media users took turns pummeling him.

It a typical Lord moment, except it lasted all day and into the early morning Friday. Since joining the network as a paid analyst in June 2015, he has fashioned his full-throated and outlandish defenses of Trump into something of a brand. In turn, his critics online and his interlocutors on CNN have made a sport out of shooting him down.

At some point Lord’s defenses — rather than his initial remarks — became the main discussion topic. The night ended with a visibly frustrated CNN host Don Lemon cutting his show off several minutes early, leaving Lord, who stood by his statements through it all, to try to get the last word on Twitter.