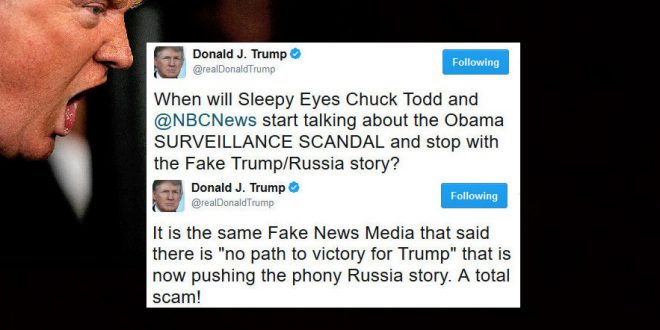 Your Daily Meltdown From Hair Furor

President Trump on Saturday called for NBC News to devote more attention to his unproven claims that President Obama spied on him and stop covering the investigations into Russia’s interference in the election. It was not immediately apparent what NBC coverage Trump was taking issue with. Chuck Todd on Friday interviewed top Washington lawyer Abbe Lowell and former Obama press secretary Josh Earnest on “MTP Daily” about the latest Russia developments. Russian interference in last year’s election is the subject of investigations by the Senate Intelligence Committee, House Intelligence Committee and the FBI.

When will Sleepy Eyes Chuck Todd and @NBCNews start talking about the Obama SURVEILLANCE SCANDAL and stop with the Fake Trump/Russia story?

It is the same Fake News Media that said there is “no path to victory for Trump” that is now pushing the phony Russia story. A total scam!