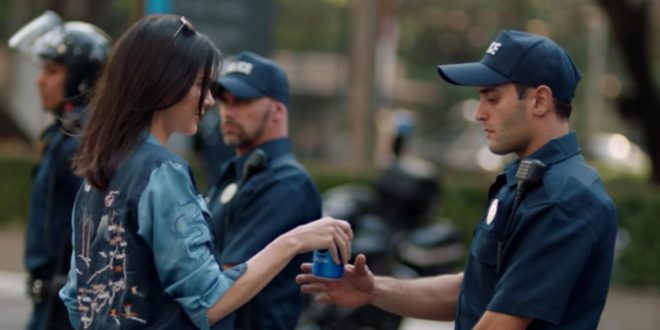 The marketing execs at Pepsi and the agency it hired to create its new protest themed campaign centered around that well-known rabble-rouser Kendall Jenner were probably thinking of that old Oscar Wilde adage that “there is only one thing in the world worse than being talked about, and that is not being talked about.”

But judging by the vociferous social media reaction since the ad went live, not being talked about might seem like a good idea right about now. Twitter, Instagram, Snapchat and Facebook, ordinarily so artfully manipulated by the Kardashian-Jenners, exploded in a mixture of open-mouthed disbelief, mockery and outrage at the sub-3 minute spot that showed supermodel Jenner tear herself away from a photo shoot to join an obliquely anti-Trumpist-type protest.

The commercial is being criticised by people who have interpreted it as a co-opt of the resistance movement whilst featuring a privileged, white, famous young model using a drink sold by a massive conglomerate to create peace between activists and law enforcement. Critics believe it is based on the recent protests over police brutality against black people in America. It has also caused anger from people in other countries around the world where there is ongoing political conflict.

J. Edgar Hoover takes aim from the grassy knoll. The motorcade approaches. He fires. JFK raises a #Pepsi to his lips, blocks the bullet.