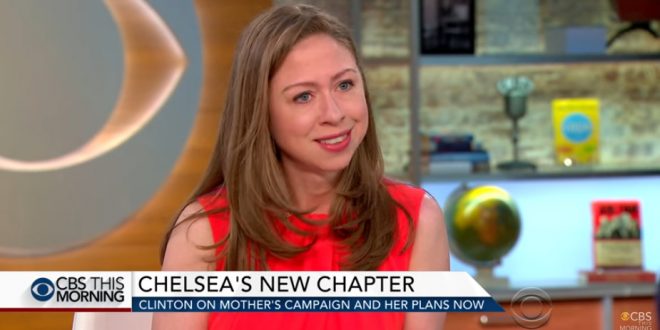 Chelsea Clinton Leaves Door Open For 2020 Challenge To Trump: “Right Now, The Answer Is No” [VIDEO]

Congresswoman Clinton? President Clinton? For now, Chelsea Clinton says her only plan is to burnish her profile as an author of children’s books. The former first daughter embarked on a six-state book tour Tuesday that was scheduled back when she believed her mother was on the way to the White House.

Still, with Hillary Clinton’s political career possibly over following a devastating election loss, people can’t stop speculating about whether her daughter intends to take up the family business. Chelsea Clinton was blunt in a Tuesday interview with “CBS This Morning,” but also left the door open. “No, no, no,” Clinton said, noting that she’s pleased with her state and local public officials in New York City.

“I clearly don’t agree with our president, but I’m definitely not the right person to run to defeat him in 2020,” she continued. “So right now, the answer is no. But I think we all need to be asking ourselves that question periodically.”

1. speculate she will run
2. force her to deny it
3. attack her for daring to entertain it
4. pageviews

Previous NEW YORK CITY: David Byrne Joins Theater Community Protest Against Trump’s Cuts To The Arts [VIDEO]
Next Susan Rice: I Leaked Nothing To Nobody [VIDEO]