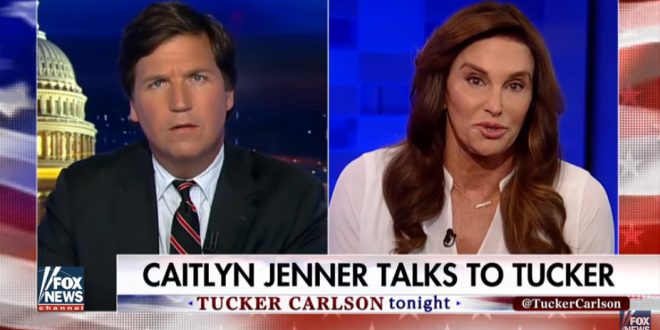 Caitlyn Jenner Tells Fox News: I Never Outwardly Supported Trump, The Media Did That For Me [VIDEO]

On Monday’s broadcast of the Fox News Channel’s “Tucker Carlson Tonight,” Caitlyn Jenner said, “I’m not a one-issue voter.” But that there is a lot of pressure to be a single-issue voter, and “A lot in our community are…were very upset that I, you know, I was a Republican, and I said at the Republican National Convention, I said it was harder to come out as trans than it was to come out a member of the Republican Party.”

Jenner said, “They were fine in Malibu with it [Jenner’s support for Trump], but let’s put it this way, I never actually came out and outwardly supported Trump. The media did that for me. I am on the Republican, conservative side, and he wound up being our candidate. And so, certainly, I was going to vote for him. He looked like he would pretty good on all LGBT issues. Which is important, because my loyalties do not lie with Donald Trump.

“My loyalties do not lie with the Republican Party. My loyalties, and what I’m fighting for is my community, the LGBT community, and particularly the trans issues that are out there, because there are many of them. And so, that’s where my fight is. And I thought Trump would be pretty good. But he’s kind of disappointed me in the first 100 days on those issues.”

Jenner also argued that the murder of transgender women should be classified as hate crimes, which Carlson claimed that implies all Americans aren’t equal. “Too many times, trans women who are murdered are brushed off to the side. ‘Oh, look, it’s only a trans woman. Look what she was doing,’” Jenner said. “They make excuses. We have to protect all Americans.” The former Olympian pointed to the murder and suicide rates within the trans community as reasons for the need for more protection and pointed out attorney general Jeff Sessions’ opposition of Title IX.

Previous TAIWAN: Same-Sex Marriage Ruling Due May 24th
Next GERMANY: Ivanka Gets Booed At Women’s Summit After Claiming Her Father Empowers Women [VIDEO]