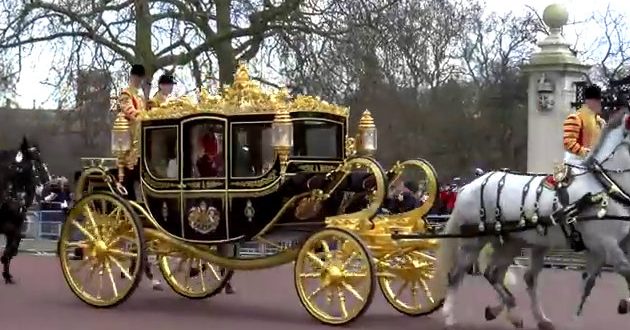 Donald Trump waving from the Queen’s royal carriage is not a scenario many would have foreseen a year ago, but it has become a very real prospect, forcing security services to plan an unprecedented lockdown.

The White House has made clear it regards the carriage procession down the Mall as an essential element of the itinerary for the visit currently planned for the second week of October, according to officials.

Security sources have warned, however, that the procession will require a “monster” security operation, far greater than for any recent state visit.

From the International Business Times:

The Metropolitan Police are preparing for one of the largest public order operations in years, as hundreds of thousands of people are expected to come to Westminster to protest at Trump’s state visit, which was postponed from earlier this year.

In 2011, Barack Obama arrived at Buckingham Palace, travelling in an armoured motorcade, protected in a bullet and bomb-proof car. “The vehicle which carries the president of the United States is a spectacular vehicle. It is designed to withstand a massive attack, like a low-level rocket grenade,” a source told the Times.

“If he’s in that vehicle he is incredibly well protected and on top of that it can travel at enormous speed. If he is in a golden coach being dragged up the Mall by a couple of horses, the risk factor is dramatically increased.