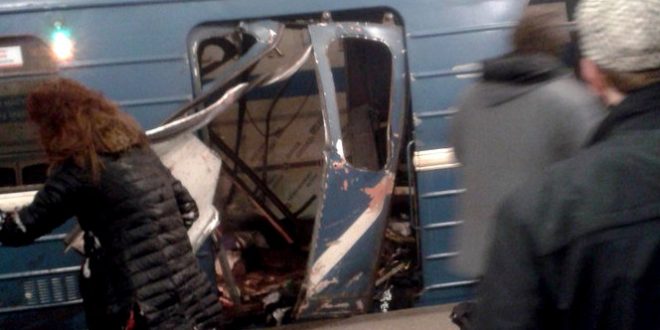 At least 10 people are believed to have died after two explosions on the Saint Petersburg subway. Pictures posted on social media show the door of a Metro train has been blown out in an explosion, which is reported to have involved shrapnel-filled devices. Other images showed passengers lying on the ground of a station platform. A Kremlin spokesman said President Putin – who was supposed to be meeting Belarusian counterpart Lukashenko in St Petersburg today – has been informed. The second explosion is reported to have happened at around 2.40pm (12.40pm BST) on the blue branch of the St. Petersburg metro at the station “Sadovaya”. A device reportedly exploded in the carriage.

Story developing. The second video clip below is live.

Previous Hate Group Rages Over Nomination Of “Ungodly” Lesbian To Be Air Force Academy Commandant
Next TRAILER: Something Like Summer