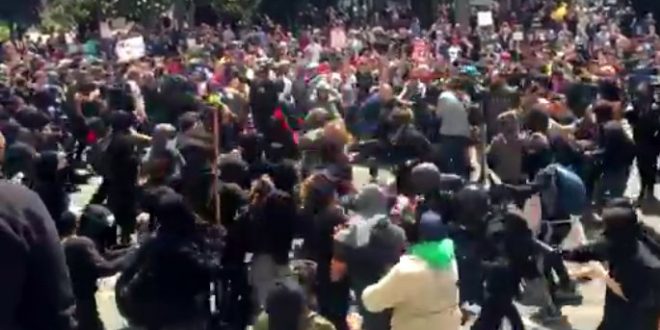 About 500 pro-Trump demonstrators and counter-protesters faced off Saturday morning at a “Patriots Day” rally in Berkeley, where the two groups have violently clashed on city streets twice in the last three months. About 10 a.m., dozens of counter-protesters dressed in black and wearing masks tore down a plastic netting that separated the two groups in Martin Luther King Jr. Civic Center Park. The Trump supporters moved forward with American flags and chants against “communists.”

Two counter-demonstrators were led away by police in handcuffs. At one point, a loud explosion could be heard in the park and fist fights broke out among members of both groups. Berkeley police, wearing riot helmets, immediately rushed in and the crowd moved back.

Stewart Rhodes, founder of the citizen militia group known as the Oath Keepers, came from Montana with about 50 people wearing security gear to protect the Trump supporters. They were joined by bikers and others who vowed to fight members of an anti-fascist group if they crossed police barricades. “I don’t mind hitting” the counter-demonstrators, whom he called “neo-Nazis,” Rhodes said. “In fact, I would kind of enjoy it.”

More from the San Francisco Chronicle:

The rally was organized by a loose collective of far-right groups. One of them, Oath Keepers, which said it would provide security, has been categorized as a hate group by the Southern Poverty Law Center.

Another organizing group, Liberty Revival Alliance, released a YouTube video in advance, billing the “Patriots Day” event as a peaceful free speech rally and stating that it does not support violence or intimidation.

Invited speakers, according to the video, include Lauren Southern, a Canadian activist who has said rape affects men more than women, and AltRight.com writer Brittany Pettibone, who has said she believes in Pizzagate, a discredited conspiracy theory involving Hillary Clinton.

Straight up nazis in Berkeley. Guy on left said he was a "national socialist. pic.twitter.com/99Q8wzpOc5

It is surreal to prepare for Seder when there are helicopters whirling above me. Apparently over 1000 nazis have descended on Berkeley.

Nathan Damigo of neo-Nazi organization Identity Evropa standing with megaphone in blue on left on pro-Trump side. #NoNazisInBerkeley pic.twitter.com/QZqSSxPm4m