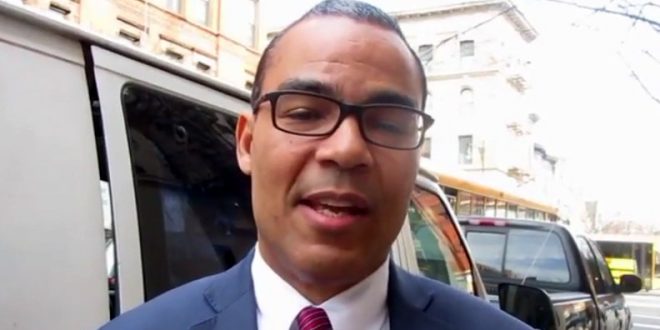 For an anti-Semite, this guy’s got tons of chutzpah. A two-bit political gadfly named Thomas Lopez-Pierre has been running for City Council on an outrageous platform that calls for stopping “greedy Jewish landlords” from committing “ethnic cleansing” against blacks. His low-rent hatemongering seemed designed to get as much negative attention as possible. And it did — as Jewish groups and leaders demanded he be booted out of the Democratic Party.

In the midst of this firestorm a GoFundMe called “Stop Thomas Lopez-Pierre Hate Campaign” suddenly popped up and was so successful it raised $5,781. But anyone who donated hoping to actually stop Lopez-Pierre is going to be sorely disappointed — because the page was created by the candidate himself to scam money from his foes. “I call it bait and switch,” Lopez-Pierre actually bragged to The Post.

City Councilman David Greenfield is asking the Manhattan Democratic Party to boot a City Council candidate running on his opposition to “greedy Jewish landlords” off the party rolls. Thomas Lopez-Pierre, who is challenging Councilman Mark Levine for a West Harlem seat, has drawn attention for a series of anti-Semitic comments and racial slurs. Greenfield (D-Brooklyn) said election law allows Democratic officials to remove a member for “disloyalty” to the party, and the uptown candidate’s rhetoric should qualify.

“There’s no question that Lopez-Pierre’s campaign is based on good, old-fashioned, virulent anti-Semitism,” he said. “It is incumbent on our party leadership to oust him immediately and to make clear to all New Yorkers that Lopez-Pierre’s values are not Democratic values. Quite frankly, if Lopez-Pierre wants to run for City Council he should do so by petitioning his way onto the Ku Klux Klan party. His views are very much in line with David Duke’s.”

Previous GOP US House Candidate: If Confederate Monuments Come Down, So Must Slavery Memorials [VIDEO]
Next China And European Space Agency Hold Talks On Collaborating To Establish Inhabited “Moon Village”