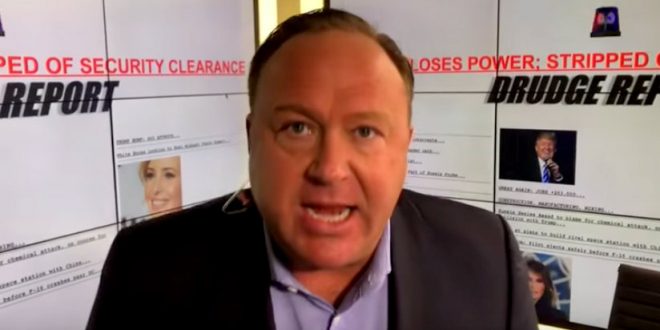 Jones said that China is using the Korean standoff to prepare for war against the U.S. and that President Trump tried to form an alliance with Russia in hopes of forestalling Chinese aggression.

And yet, Jones said, Democrats and Republicans alike are trying to undercut Trump, including California Democratic Rep. Adam Schiff. Repeating his homophobic comments about Schiff, the “InfoWars” broadcaster said “scumbags” like Schiff are hurting the country: “You think having all those fairies and pansies over there with their little chicken necks running around attacking our president all day makes us look strong? It makes us look weak!”

“So if China keeps pushing,” he added, “the only option is full commitment to hit China preemptively. That’s the only way to survive this nuclear war and Trump knows it. And Russia has already been told they better stand down. The United States is preparing to nuke China so get ready assholes! All of you wanted it, you’re gonna get it!”

Never forget that Trump listens to this lunatic.

Previous Tony Perkins Is Outraged At Federal Court Ruling That Civil Rights Act Applies To Anti-LGBT Discrimination
Next FLORIDA: Trio Robs And Kidnaps Man After Luring Him On Grindr, Steals His Dog, One Suspect Arrested