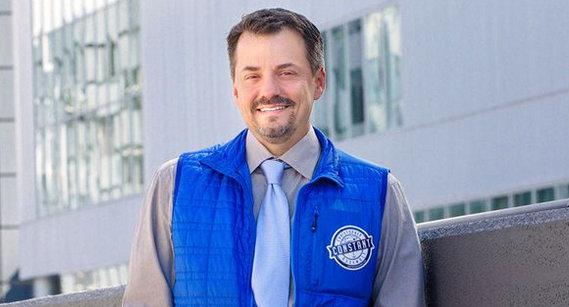 Until yesterday, no openly gay person had ever been elected to any public office anywhere in Alaska. Today they have two. Alaska Commons reports:

In 2009, the Anchorage Assembly passed an ordinance banning workplace and employment discrimination against LGBTQ residents of the municipality. Then-Mayor Dan Sullivan vetoed the measure. In 2012, in an election fraught with voting issues, voters overwhelmingly put down a ballot proposition with the same goal. Five years later, Anchorage has elected their first openly gay elected official — twice over.

Christopher Constant [photo], running against a prominent Democrat and three lesser known conservatives for the downtown seat being vacated by Flynn, won Tuesday with 52 percent of the vote. His closest competitor was David Dunsmore, a fellow Democrat, who mustered just 23.35 percent of the vote after the latter pursued a final week of negative campaigning, which evidently backfired.

Felix Rivera, also openly gay, is now too an Assembly member-elect, fending off three challengers while maintaining nearly 47 percent of the vote in midtown Anchorage. Rivera ran for the seat being vacated by Assembly Chair Elvi Gray-Jackson with her full support — as well as the support of current Vice-chair Dick Traini.

Constant has been a JMG participant for years and provided us with many tips during Anchorage’s years-long battle for LGBT rights. Oh, and remember the undercover homocon who was unmasked by Dan Savage? The one who tried to fake-out voters by using a photo with his sister? Well, he lost to a progressive woman.

Two Victory Fund endorsed candidates – Felix Rivera and Christopher Constant – won their races for Anchorage Assembly to become the only openly LGBTQ elected officials in Alaska. Tuesday’s wins are groundbreaking for Anchorage and the entire state, as both candidates faced numerous opponents and campaigned on their commitment to LGBTQ equality and social justice.

“These historic wins in Anchorage will reverberate throughout the entire state of Alaska,” said Victory Fund President & CEO Aisha C. Moodie-Mills. “There are currently zero LGBTQ elected officials serving in all of Alaska – so Felix and Alex will be much needed voices when they take office. We know that representation is power – and that LGBTQ elected officials humanize our lives and change political and policy debates. The wins for Felix and Christopher will lead to more inclusive legislation that benefits all residents of Anchorage.”

Felix won with 47 percent of the vote despite a crowded field and one of his opponents sending homophobic mailers the weekend before the election. The election win makes him the first openly LGBTQ Latino person to win an election in Alaska. Christopher, a long-serving LGBTQ activist in Alaska, faced five opponents and won with 52 percent of the vote. Both Felix and Christopher will be the first openly LGBTQ people to serve on the Assembly.