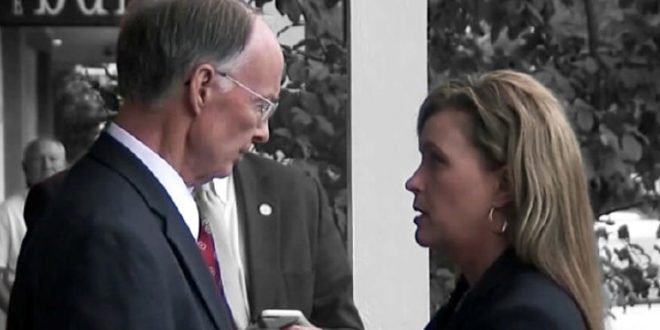 ALABAMA: Wife Of GOP Governor Read His Love Texts To Mistress In Real Time On His State-Issued iPad

Earlier today it was reported at embattled GOP Alabama Gov. Robert Bentley is expected to resign in the face of four possible felony charges related to his failed efforts to conceal his affair with now-former aide Rebekah Mason [photo]. Oh, but there’s more:

After tense fights with his then-wife over the alleged affair, Bentley would sometimes bolt, leaving state security scrambling to locate the man they are paid to protect. Sometimes these frantic searches necessitated dispatching a state helicopter, according to Bentley’s former scheduling director, Linda Adams.

“One Saturday morning I was called from security, and I don’t remember which one telling me, that we’ve lost the governor,” Adams said in sworn testimony before the Alabama Ethics Commission included in the report. “I said, what do you mean we’ve lost the governor. They said well, he just took off in his truck.”

Unbeknownst to the governor and Mason, the frequent romantic texts they exchanged were all visible to Dianne Bentley. The governor’s state-issued cell phone’s cloud was linked to his state-issued iPad, which he had gifted to his then-wife, allowing her to watch the rumored affair unfold in real time.

“I’m so in love with you,” Bentley wrote to Mason in one text, along with two heart-eye emojis. “We are pitiful.” “Poor Robert. Poor Rebekah,” he added. “Yes… Bless our hearts… And other parts,” Mason wrote back. “Magnetic,” Bentley replied. The device oversight was only one of Bentley’s errors. In spring 2014, he mistakenly sent a text to his wife reading, “I love you Rebekah,” along with an emoji of a red rose.

In 2015, Bentley filed a SCOTUS brief which declared that same-sex marriage “demeans democracy.” Seriously. The brief was written by then-Alabama Attorney General Luther Strange, whom Bentley tapped to replace Jeff Sessions in the US Senate.